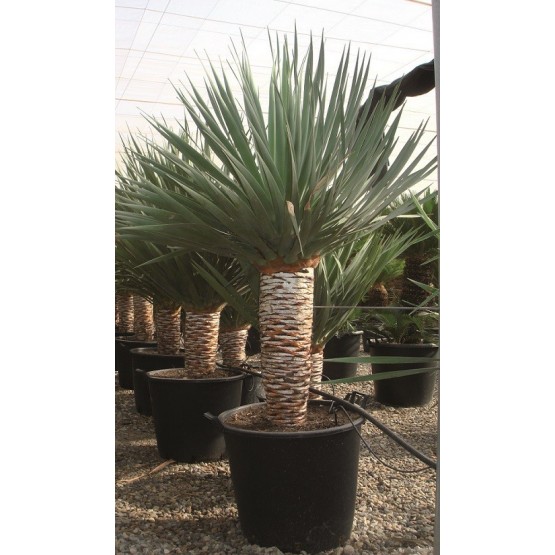 Plant with a bushy habit, leaves are rigid and lance-shaped, grey-blue in colour.Dracaena draco, the Canary Islands dragon tree or drago, is a subtropical tree-like plant in the genus Dracaena, native to the Canary Islands, Cape Verde, Madeira, and locally in western Morocco, and introduced to the Azores. It is the natural symbol of the island of Tenerife. Dracaena draco is a monocot with a tree-like growth habit currently placed in the asparagus family. It is not a real tree. When young it has a single stem. At about 10–15 years of age the stem stops growing and produces a flower spike with white, lily-like perfumed flowers, followed by coral berries. Soon a crown of terminal buds appears and the plant starts branching. Each branch grows for about 10–15 years and re-branches, so a mature plant has an umbrella-like habit. It grows slowly, requiring about ten years to reach 1.2 m in height but can grow much faster. Being a monocotyledon, it does not display any annual or growth rings so the age of the tree can only be estimated by the number of branching points before reaching the canopy. The specimen called "El Drago Milenario" (the thousand-year-old dragon) growing at Icod de los Vinos in northwest Tenerife is the largest and the oldest living plant of this species. Its age was estimated in 1975 to be around 250 years, with a maximum of 365 years.