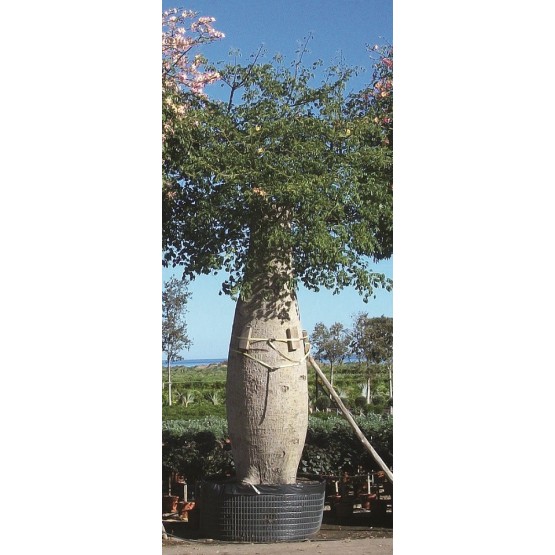 Tree with a spiny trunk, the spines are conical, the serrated leaves are light green. Produces large pink flowers. The silk floss tree (Ceiba speciosa, formerly Chorisia speciosa). It has a host of local common names, such as "palo borracho" (in Spanish literally "drunken stick"). It belongs to the same family as the baobab and the kapok. The natural habitat of the floss silk tree is the north-east of Argentina, east of Bolivia, Paraguay, Uruguay and southern Brazil. It is resistant to drought and moderate cold. It grows fast in spurts when water is abundant, and sometimes reaches more than 25 metres in height. Its trunk is bottle-shaped. It is studded with thick conical prickles which serve to store water for dry times. In younger trees, the trunk is green due to its high chlorophyll content, which makes it capable of performing photosynthesis when leaves are absent; with age it turns to gray. The branches tend to be horizontal and are also covered with prickles. The leaves are composed of five to seven long leaflets. The flowers are creamy-whitish in the center and pink towards the tips of their five petals. Their nectar is known to attract insects such as monarch butterflies, which perform pollination. C. speciosa flowers are in bloom between February and May, but can also bloom at other times of the year. The fruits are lignous ovoid pods, 20 centimetres long, which contain bean-sized black seeds surrounded by a mass of fibrous, fluffy matter reminiscent of cotton or silk.